Everything Amazon Flex Drivers Need to Know About Amazon Blocks

Amazon Flex schedule drivers to work through picking up “blocks.” These Amazon blocks are schedule shifts on Amazon. Any Amazon Flex driver can see blocks for any warehouse in the region. Here are the different types of warehouses:

Below, I will highlight what we have in Seattle, which has just about every type of Amazon blocks (shifts) you could think of.

Here in Seattle, we typically have 2 hour blocks, so 10am-12pm, 12pm-2pm, etc. The Amazon flex blocks run from 8am to 12am (sometimes until 1am on longer 3 hour Amazon flex blocks). Typically, Amazon flex blocks start becoming available just after the one before started. So you could theoretically pick up Amazon flex blocks between 8am-10am for the 10am block. Note that drivers have up to 45 minutes to forfeit their block without incident so there could be blocks available at say 9:15am for 10am.

I have talked to a lot of Amazon flex drivers in my market. The “intel” is that there isn’t a specific time that Amazon blocks appear. It can be almost at anytime between 8am and 10am. I’ve picked up Amazon blocks 90 minutes before and also 2 minutes before the start of the shift. I’ve seen another Amazon flex driver pick up a 10pm block right at 9:52pm at the warehouse. There is no rhyme or reason to it.

For Amazon Flex Prime Now Deliveries, there are sometimes 4 hour blocks available for pickup but you have to be pretty lucky to get these. I once picked up a 6pm-10pm block after my 10-6pm shift. I picked it up around 5pm or so, not that it really matters since it can appear at almost anytime. The only reason why I got it was because many Amazon flex driver already had a 6-8pm block already and they weren’t eligible for the 6pm-10pm block. Some Amazon Flex driver would drop their 6-8 in the hopes of getting 6-10, which I thought was pretty insane.

Is there One Set Schedule for Amazon Blocks?

In our area, the 10pm-12am block (the last block) tends to run very lean, so there are often only a few blocks available and they are very hard to get. They typically won’t open up many slots for the Amazon flex blocks between 8-10pm, and if they do, there would only be one or two Amazon blocks. The warehouse manager said that they tend to under-staff that block and Amazon flex driver often have very long routes, sometimes as many as 10 deliveries on a 2 hour block. Amazon sometimes get burned for short-staffing because they sometimes end up with undelivered orders.

The above is just a general idea of what Amazon flex blocks are available. Once you pick up a few blocks and talk to another Amazon Flex drivers, you can find out more about different blocks. Experience with Amazon Flex blocks will greatly help your chances of picking up more Amazon Flex blocks.

Amazon Flex Restaurant Delivery blocks are blocks where you are stationed in a given location and delivery food from restaurants in that area. Restaurant orders may come from restaurants within the 2 mile radius but delivery could be up to 10 miles. Here is what it looks like: 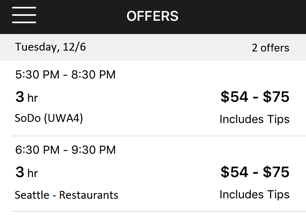 The pay rates are the same but you do Hot Wheels (Restaurant only) Amazon blocks. Some people prefer doing Prime Now deliveries because they make more deliveries with it, which leads to more tips. However, Prime Now Amazon Flex blocks so hard to get so some Amazon flex driver will accept restaurant only amazon flex blocks to make money with it.

Below is a post that covers delivery from a Restaurant Block:

There are some Amazon Flex blocks that require drivers to be stationed at a specific store. The Amazon block will display the store name and area location. Amazon Flex drivers will deliver orders from that store. The most common store is now Whole Foods but it can be other supermarkets, pharmacies or Petco. There are in-store-shoppers at Whole Foods and other stores who pick and bag specific orders and Amazon Flex drivers delivers these orders. Once you deliver these items, you will get an indication to return to your original store.

An Amazon Flex Store Block  is very similar to a Restaurant Block so many of the same operating procedures applies to Amazon Flex blocks at stores.

Amazon Flex Logistics Blocks are scheduled shifts to delivery Amazon Prime packages. Similar to an Amazon Flex Prime Now Block, your schedule shift starts at an Amazon warehouse. The number of packages can vary greatly depending on the length of your block. Many Amazon blocks are 3 hours long and it is typical to get 40-80 packages on any given block. Some route are better than others. Some routes are through city centers that require fewer miles but much harder to find a parking space. Other routes requires a lot of miles, but parking is much easier since they are in quiet residential neighborhoods.

There isn’t any magic or cheating that happens when you get blocks. It just takes a lot of persistence.

What do the Full Time “Flexers” do?

Amazon allows you to see Amazon blocks from other warehouses and regions. This is beneficial for some drivers since it offers them more options for work, especially when they live on the border of two different zones. However, this is not great for many people who live squarely in one zone and don’t want to travel that far for another zone.

When you are picking up Amazon blocks, you need to be careful not to pick these blocks up. However, if you already on a shift or picking up blocks for tomorrow, you have time to check where the block is and drop it if you need to. This is the only way to deal with swiping too fast and picking up a block in the wrong area.

f you checked your offer page at 10am today, you can get a 10-12pm block for tomorrow. I often use this trick to get blocks for the next day. However, it has been getting harder and harder to do that since more people are using this tactic to pick up tomorrows blocks.

When to check for Amazon Blocks

As you see above, Amazon blocks can almost be at any time. Typically, you can pick up Amazon blocks up to 2 hours ahead of time. Say you want to pick up the 2-4pm block. You would want to check starting at 12pm. If you want the 4-6pm block, you will want to check starting at 2pm. Note that if your location only have 4 hour blocks, then consider checking within 4 hours of the next block. This hasn’t been the case here in Seattle (in terms of both having only 4 hour blocks and to pick up blocks 4 hours ahead of time) but it may apply to your market. Again, once you actually get a block, go to the warehouse and ask around what type of Amazon blocks are available. This will give you a sense of when to check the application.

Will I Get Notifications From Amazon Flex?

On some days, there are notifications that blocks are available. Once you sign in and check, you won’t see any blocks, even if you respond to it immediately. The key in this case is to keep refreshing for the next 3-5 minutes. You’ll most likely see the option to pick it up. When they make those announcements, its when they need more drivers. In my local warehouse, people pick up blocks within seconds.

If they are sending out notifications, there is a good chance you can pick up a Amazon block a minute or two after the notification. Some rare times, Amazon blocks stay available up to the start of the block. This is often an odd hour block, like 5:30-8:30. It ruins 3 blocks, from 4-6, 6-8, and 8-10. Many drivers already have one of those blocks and the rest don’t want that block since it blocks them from picking up any of those three blocks and they can’t work again until 10pm.