It was announced last month that Instacart would be moving away from scheduling hours to pickup only, just like other delivery services such as Postmates and Caviar. Before the change, you would choose your availability and then you get a schedule based on that availability, with the best shoppers getting the best hours. This heavily favors either older Instacart shoppers or better shoppers, which potentially could shut out new shoppers. However, Instacart have been giving preference to new shoppers both in scheduling and also batch assignments. According to a few reports by shoppers, new shoppers are given “Early Access” for the first four weeks so are more likely to pick the hours they like.

There is also some large differences from the new rates Instacart sent out last month to the actual rates posted in the Instacart app for next week. See below for more information on that.

Instacart is moving to a pickup-only type of scheduling system where you pick the hours you want, if it is available. For those shoppers who don’t get enough hours, they know all about picking up hours like myself. I typically pick up about 12-15 hours a week during daytime hours. Over the past month, more and more shoppers had to pick up hours on their own because they didn’t have enough hours or weren’t scheduled at all. 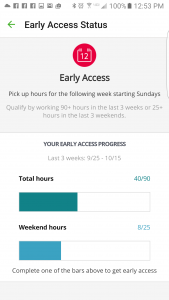 As you can see, I did not qualify for “Early Access” but I may consider working on the weekends to get it. There is no way I’ll be working 30 hours a week every week to try to get early access and I will explain later.

When they announced the new pricing system, they made it seem that “Peak Days” rates were higher and that they would mostly occur in Sundays and Mondays. However, there was language in the original announcement that said that rates can vary by demand and other factors. Well, now I have some preliminary rates for Seattle on “Peak Days” and “Non Peak Days.”

Below you will see the Peak days for Seattle. I would note that these “flames” may change from week to week. Expect busy days like Thanksgiving and Holidays to have flames on them. 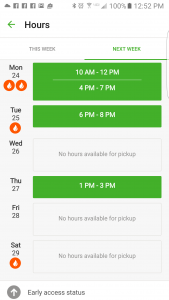 It is definitely not what it seems. As you can see in the above pictures, there is one flame on Tuesday, Saturday and two flames for Monday. I thought this would be the case in Seattle since Monday seems to be so much busier than Sunday.

Here are the pay rates for Monday, Tuesday and Thursday (non peak day): 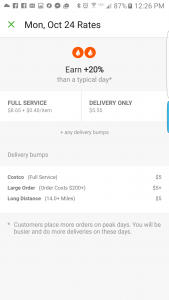 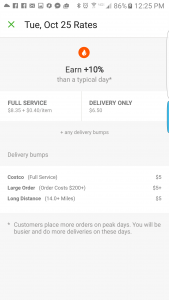 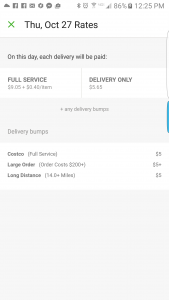 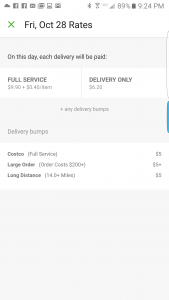 Here is a quick comparison of the rates:

FS = Full Service, DO = Delivery Only

You can find these rates if you picked up any hours next week and if the new pricing system goes live next week in your city. If you have picked up any hours, on top of the schedule, you will see a small section on top for pricing. Click on the line with the two flames to see the pricing. 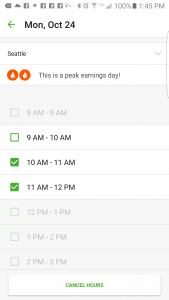 You can quickly see that there is no almost no rhyme or reason for the prices. You would expect prices to be higher on a peak day than a non peak day, but it isn’t. You would also expect rates to be higher on a Monday than say a Thursday.  It all differs by as much as $0.70 so it’ll only add up to a few dollars on a full 8 hour shift anyway, but the small differences annoy us. Here is what they originally claimed the rates to be last month for peak and non peak days in Seattle: 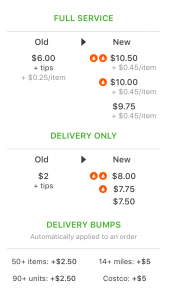 As you can see, the new rates are nowhere near as high as originally proposed. We were all hoping that the above rates would be the base and then go up from there if there is significant income from the service fee. We see that these rates are probably as high as they will ever be on some special cases and that the new variable rates are often much lower.

Over the past week, Instacart have been changing the application to say pickup hours instead of scheduling. The new scheduling process went live on Sunday with shoppers qualifying for “Early Access” having the first experience with picking up hours. I didn’t qualify, so I had to wait until this morning at 9am in order to get access.

The system is similar to what it is today, just that now you have to choose all your hours. I often pick up hours, especially for my weekly Monday weekday hours. Here are some tips to pick up hours: