What Austin Rideshare Drivers Need to Know About Fasten

Back in May, Fasten announced on their blog post that they were launching in Austin due to Uber’s and Lyft’s sudden departure from Austin in protest of the regulations set to start this month on fingerprinting. They started services on June 1st.

They are among a variety of applications in Austin to fill in the void of Lyft’s and Uber’s departure from Austin. Since they are a new service, there are some drivers who are constantly handing out referral cards and getting $10 per new passenger and making a nice weekly income from it. If you haven’t already, go to the Fasten office and try to set up a “street team” to give out passenger referral cards. They will have blank cards and can help you print out labels with your referral code on it. It is much more effective to hand out cards in teams of 2 or 3 in any given area since it will give you the street cred for people to accept the cards.

If you are interested in trying it out as a passenger (free ride up to $20), here is the link: Sign up for Fasten

If you are interested in signing up as a driver, here is the link: Drive for Fasten (make sure to put in TN4776 to get your first month commission free!)

After speaking with a few drivers and passengers here, it seems as if passengers really like Fasten over other competitors, such as GetMe and Fare. This is mostly because of the stability of both the passenger and driver app. Also, they seem to be the only application right now (Fare is updating their app to do this) that processes requests based on proximity, rather than an aggregate list of requests on the driver application. I used it a few times and never had any issues finding drivers at all times of the day in Austin.

Because of the little competition they are now facing, there isn’t many ongoing driver and passenger promotions here in Austin. Here are some examples of the recent driver promotions they have had:

These promotions come and go, but I have seen these type of promotions in Boston as well. They have been happening more often in the summer months.

It was fairly easy. I did it on the computer but it would be easier to do it on your smartphone since you can just take pictures and upload it into the app. With the computer, you would need to download the pictures (license, registration, insurance, car pictures) onto the computer and then submit them to Fasten

There are about 12 videos that you need to watch. There is a quick quiz after every video and it is pretty easy. There are some key differences between Fasten and Uber and Lyft and the videos highlight all of them so make sure to pay attention. I will be covering much of that in the below post.

Here is the fare table from Fasten on their blog (they were announcing higher fares on June 3rd): 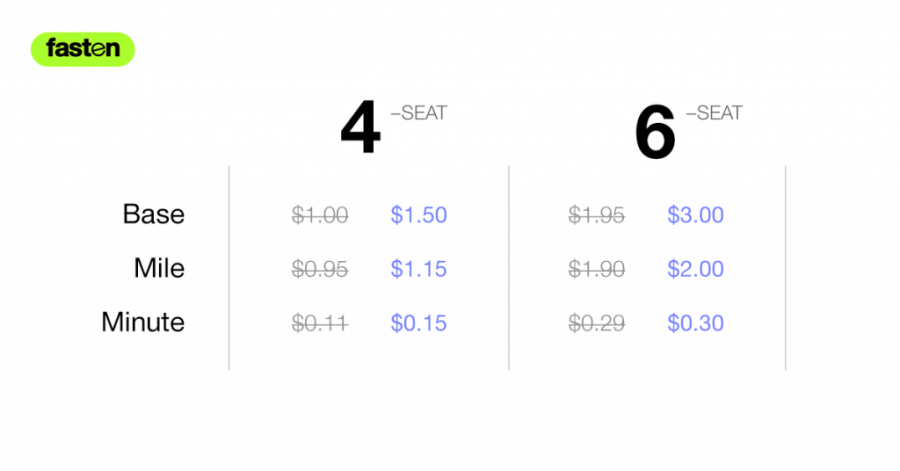 Here is a comparison with Lyft and Uber rates in Austin:

There is no such thing as a minimum fare. Its just base, distance and time. They claim there is no such thing as a really small fare. Reviewing my driving history with Uber and Lyft, I had many more short trips on Lyft than I did on Uber. However, almost all of the minimum fare rides on Lyft happened before May 2014. I have gotten only a few since then on either Uber or Lyft. I am not sure how this policy would work in other cities in the US.

There is no tip directly through the app. Your riders retain the option to tip if they’d like.

Fasten has changed their rating system to a thumbs up and a thumbs down. They believe it is a better way to get passenger feedback about their rides. The application asks if its good (thumbs up) or bad (thumbs down). After you pick one, it will ask you what you liked or dislike (navigation, driver, car, etc). If you rate it a thumbs down, it will require you to put in one of the available options.

After speaking with Malley in Austin, he says that Fasten has its drivers maintain a 97% thumbs up ratings.

Pay periods 12am Monday to 11:59 Sunday, processed on Monday and should be deposited on Wednesday like Uber (Lyft is on Tuesday, and deposits thursday or friday)

Fasten charges drivers a flat fee per trip, per day or per week. I think this is a real game changing way to rideshare. I see much less fees this way but hopefully there will be enough rides. Right now, they are doing many guarantees round the clock (7am to midnight) so it should be very good for new drivers.

No smoking in the car. It goes for both passengers and drivers.

Do you compensate for passenger damage?

Use the “request fare review” for damage by passenger, similar to how Uber works