I have been talking to various drivers across the country about last night. Many drivers have been talking about how busy it was last night, which resulted in surge pricing most of the night. Some cities had surge before midnight, but seemed as if most markets had surge pricing after midnight until well into the morning. I was looking at the passenger and driver apps this morning and there was solid surge pricing in Boston into the afternoon, which is kind of crazy.

It makes sense that this year’s NYE was better for drivers than last year. Last year NYE was a bit over hyped and a ton of drivers were out on the road. Those who drove during 2013 noted that it was great so many drivers were back in 2014 to try to get the same pay day, but many drivers claimed to made more money in the weekend before than on NYE2014. Because of this, some drivers decided to skip driving. This year, many more drivers took a more conservative approach. Many kept checking the apps for surge and Prime Time and took the guarantees with a grain of salt.

There seemed to be a lot of drivers out on the roads before midnight because I checked the app in my neighborhood around 11pm and there were a ton of cars with no surge. I had some concerns about meeting the 1.5 rides an hour between 12am to 3am with so many cars out. I had a long day so I didn’t get a chance to drive on NYE but many drivers in Boston noted some very lucrative trips well into this morning.

I personally didn’t drive last night but spoke to many drivers who did and many who drive did very well. Some drivers had long rides with high multiples. I don’t think I have seen so many reported rides at being over $200. I don’t think this will come out well in the news outlets. It also didn’t seem that people had a choice as well. Some passengers claimed not being able to get rides at all, especially Lyft passengers.

Despite many Uber drivers doing very well on NYE, Lyft drivers had a different experience over NYE. There were a few reports of long ETA of over 40 minutes, mainly due to the lack of drivers. This interfered with many drivers ability for the guarantee and also the Power Driver bonus that relies on acceptance rates. There were various guarantees in different cities, ranging from $30 an hour to $50 an hour. In the Boston market, Uber had a $50 guarantee and Lyft matched it a few hours later. I am not sure how the outage figures into the guarantees but I think that many drivers would be emailing Lyft to still get the guarantee. One driver called and asked his passenger if 40 minutes was ok and he was willing to wait as he couldn’t get another car.

In addition, there are multiple reports of the Lyft app suffering from an outage around 1:30am-3am EST, with some west coast cities being affected after midnight . Many drivers noted that they couldn’t complete the trip they were on or accept any trips. Eventually it kicked drivers offline and many drivers couldn’t get back online until 3am. I am not sure if the outage was nationwide, but a few large cities were affected by it.

Here were a few screenshots of the outage from the driver application: 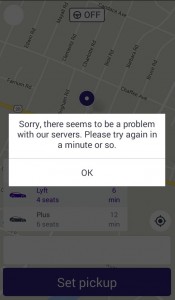 Did anyone have any trouble with the Lyft application? How did you do on NYE? Did you drive or did you make other plans? Let us know how you did in the comments!