Uber decreased fares in 5 cities on July 31st. I was a bit late in reporting on this, but still had been keeping track every week.. This is in addition to the massive price cut when 48 cities that got their price cut in January.

Also, last month’s “temporary” price decrease in Atlanta is permanent for the time being. They have done this before when they “temporary” cut prices in 48 cities back in January, so I’m not surprised by this. Hopefully they will increase it in September, but its unlikely that will happen due to “positive results.” 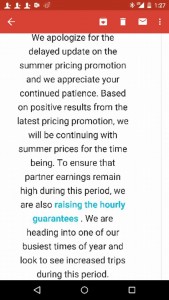 Here is the list of cities that had a price decrease:

These were price adjustments to increase demand and to be more in line with the rest of the other cities. Some cuts were pretty big at about 24%.

Take a look below for more details on it.

Austin got a 7% price decrease:

Milwaukee got a 18% price cut with their minimum fares down to $4.

Oklahoma City and Tulsa (both same prices before and after) got a 14% price cut and minimum fares down to $4:

Here are the list of cities with a minimum fare under $4:

Many are these states are in the south, with three cities in both Texas and Indiana making up much of the list.

With all of these price cuts, I don’t see any increase of fares anytime soon. Now I believe that Uber will increase commission in order to boost profit rather than to raise prices back up in the short term. Prices will go up once Uber has outgrown its other competitors.