How Lyft Screwed Up the $1000 Signup Bonus

On the surface, the Lyft offer seemed to be the best ever. $1000, one Lyft by next week. Don’t need to be an Uber driver. What could possibly go wrong? Well, everything.

I quickly noticed that drivers had to be onboarded within a week. No big deal right? Well, I’ve done my fair share of mentor sessions over the past year and I know that on average it takes about a week. Some in less time, and some in more time, but a majority of my mentees are on the road in a week. I noted this when I originally published my post about the $1000 signup bonus. But the promotion ends in a week. Well, that is where all of the issues lie. Lyft has to onboard everyone within a week for everyone to be eligible for the promotion.

Lyft admitted that they didn’t expect so many people to sign up. I am not sure if I can believe that. $1000 after one Lyft is really generous and unheard of in that many markets (It was about 12 cities originally before the offer was modified). This unexpected demand put a lot of pressure on a long application pipeline that they couldn’t handle. This is why I am taking a critical look at the entire application process with observations I’ve made both as a recruiter and mentor and also from comments from hundreds of drivers who tried to signup for this promotion.

One ride, but needs to be given within a week of signing up. Offer started on 2/26 and applicants needed to be approved and give their first Lyft by 3/5.

Because of demand, they changed the offer a day later on 2/27. They cut back the list of cities and now require 30 Lyfts by March 8th, which is still a very tight timeline. Technically, drivers had an extra two days to get approved but this assumes that they can give 30 Lyfts in a day. Still recovering from giving 50 Lyfts in 3 days (two of those days I was at my full time job, so I ended up working a total of 37 hours in just three days, 21 on Lyft, 16 at my normal job), I can say that giving 30 Lyfts in a day is tough but doable. It’ll take anywhere between 10-13 hours though so that’s a really long day.

Execution of the offer

So there are many things Lyft needed to do well on their part to onboard so many drivers all within the same week. Here is what the complete Lyft new driver application process looks like:

Unfortunately, the entire process is linear and cannot be done in parallel so each step needs to be done before the next one could start. A week is really starting to look a bit tight.

So as a recruiter, I’ve seen all sorts of issues with the application. Duplicate applications can totally hang up the entire process and usually takes a day or two without a recruiter to resolve. Even at best it takes a few hours with the help of a recruiter and a senior analyst at Lyft. As far as I know, getting hung up in the application stage is an issue with a minority of my applicants but still annoying.

Lyft’s DMV check is very rigorous and thorough (assuming your license has been valid for more than a year) but surprisingly only takes about 10 seconds or so. Its usually instant and done right before the applicant is allowed to get to the “Drive to your Mentor Now” screen. This can definitely eliminate a good number of applicants due to issues with their driving record.

As mentors, we weren’t really warned about the promotion and the huge wave of applicants so many of us did our best to mentor new drivers last weekend. With the fact that we don’t have mentor only modes, some of us spent time driving instead of trying to onboard new drivers. The fact is that the mentor program was built to handle a certain level of applicants, but with this promotion, there were way too many applicants than mentors. Eventually it seemed many applicants got in their mentor session over the weekend but the wave of mentor sessions caused some technical difficulties with the mentoring aspect of the Lyft system.

The mentor system wasn’t working for much of the weekend so many mentors had to manually submit in the information directly to Lyft. Many mentors were stuck in mentor mode and couldn’t submit the information so there was a lot of time wasted there nationwide.

Also, a rash of mentors were deactivated as mentors due to a “glitch” in the system. I am unsure what caused this. There were many mentors who were reactivated but some were permanently deactivated right around the promotion, which is just convenient timing. All this means is that there were much fewer mentors available last weekend, which is the critical time to do the mentor session in order to qualify for the promotion. Despite this, I haven’t heard many reports about not being able to find mentors though but I am sure there are a few applicants out there who spent the better part of a day waiting for a mentor.

This portion of the process always take about a week. Sometimes the time between the mentor ride and final approval is only a few days while sometimes it can take up to two weeks. It sucks but no one really knows what happens, until a lot of drivers started calling Sterling.

As far as I know, all profile pictures are manually processed. What this entails is to take the picture taken by Mentors of the applicant, and changing the background to the lush green background. For a skilled photoshoper, this should only take a minute, but with the wave of applicants, this manual process is taking a bit longer. Some drivers have gotten emails that everything was set to go other than the profile picture, so it would take some extra time to process it.

The Lyft staff doesn’t do anything with the car picture, other than check that it meets a certain criteria. This is also a manual process so this also takes time and with the many applications coming through, this can be another potential bottleneck.

I have heard from a few drivers that they found out from Sterling that they passed the background check but that they haven’t been approved by Lyft to drive yet. This may also be a manual process in which a Lyft employee reviews the entire application before giving it a final approval. There is definitely some lag in this part of the process as well.

Lyft’s Responses to the Offer:

So here was their initial update on the offer earlier this week: 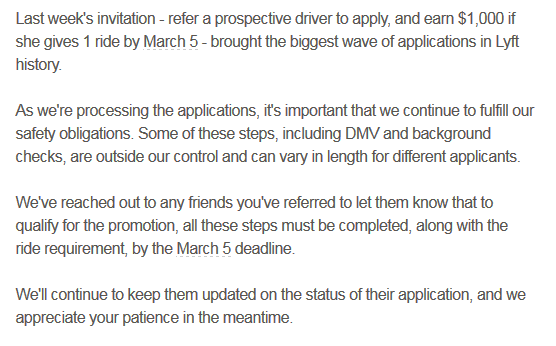 The summary is that they weren’t backing down on the March 5th deadline. It essentially reiterates the timeline and that they will be communicating with those who qualify and also do not qualify for the offer.

This response caused a lot of outrage from Lyft drivers and would-be Lyft drivers a like. The common theme of the outrage was that they were tricked into signing up their friends and family for this offer. A lot of people saw this as a bait and switch; luring new drivers to sign up but never intending to pay them out. Many vowed never to drive for Lyft again and many would-be drivers also never intend to drive for Lyft going forward.

After the press got wind of it (Forbes: lyft-might-not-deliver-1000-driver-bonuses/ and Buzzfeed: is-lyft-luring-new-drivers-with-a-bait-and-switch-bonus-offe#.ulR5rG4oe), John Zimmer and Lyft decided to at least address the issue with background checks and the approval process.

They came back with extending the offer last night just a little bit. Very little. 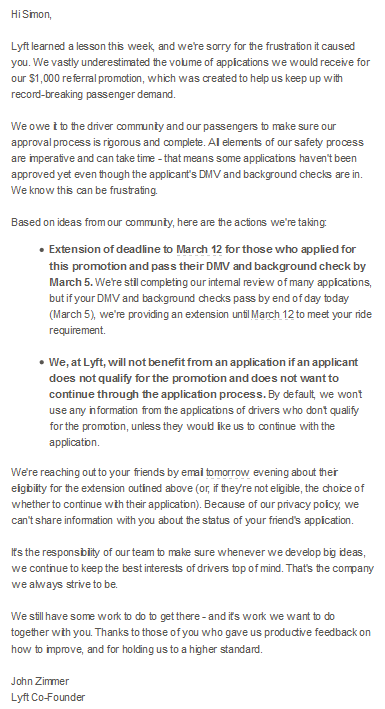 What I am interested in is how many drivers actually qualify, compared to the number of drivers who applied. Is that number just 10%? 50%? I think anything below 100% would be bad for Lyft. Drivers who haven’t even started driving for Lyft are already saying they wont be driving on Lyft.

I think Lyft should just extend the promotion indefinitely and give drivers enough time to get onboarded and drive. If they don’t, drivers won’t be signing up for any future promotions, whether is $500, $1000 or even $2000 dollars. Everyone will be looking closely at the terms and conditions and wonder if they will actually get paid out. At this point, its not really about the money. Its about PR and so far, they’ve been doing very badly on it around this issue.

It is definitely not the first time the rules during a Lyft promotion prevented many drivers from getting the actual bonus. The most recent one was back in Halloween where drivers had to give two Lyfts an hour to qualify for the bonus. Well, many drivers lost out as they either couldn’t get two Lyfts an hour, or that some of those Lyfts occurred in the wrong hour (say 1 Lyft in hour one, and then three in hour two). The way in which the bonus (if any) was paid was also messed up. Payment stretched over the course of three weeks in some cases. I spoke with a Lyft senior analyst face to face and she admits that Lyft doesn’t do promotions very well.

This definitely leaves the door wide open for Uber to step in and take even more market share by having a smaller promotion of their own. They don’t even need it to be anywhere near $1000. Just a few hundred bucks, promise to pay out promptly, and they’ll have many converts for cheap.

I personally will still keep driving for Lyft. Luckily most of my friends either don’t have cars or already drive on Lyft so I couldn’t really get anyone to sign up for this promotion other than a few readers of this site (which I need to apologize to). The only reason why I will still continue to drive for Lyft is for a generous bonus for completing trips, like the one where they offered $1000 for 50 trips within a week. This weekend for example, Lyft has a decent $45/hr (pre-commission) earnings guarantee in Boston whereas Uber doesn’t so if I were to drive this weekend, I would do Lyft. I probably would skip any kind of promotion under $40/hr for Lyft as there is a chance they never pay up so there needs to be sufficient upside for me to drive on Lyft with any kind of guarantee. If they offered a bonus for trips, that’s another thing, but hourly guarantees, I’m still skeptic on those from Lyft.

What are your thoughts about this whole fiasco? Would you keep driving for Lyft?