Should You Drive For Uber or Lyft – Comparison of Fares

In the last few weeks, both Uber and Lyft has cut prices in some of their markets. Uber gave price cuts to 48 of their cities (the total count in 2015 is 52 in total) and Lyft gave cuts to 10 of their own markets:

Which service do I earn more on, Uber or Lyft?

A few months ago, Lyft had lower fares. Their fares were about 10% lower than Uber’s on average. Now with Uber’s drastic price cut in many of their cities, and Lyft has a few price cuts of their own, which service has lower fares, which may mean lower earnings?

Well according to the data below, Uber has lower fares than many of Lyft’s cities. On average, they are 15% lower. These values were calculated using the base cost, per mile and per minute rates and applying an average trip of 2 miles and 10 minutes to the calculation. Even if you adjust the mileage and time up and down, the average price different does not change much, but it may affect the fares in individual cities a bit more.

From looking at the fares alone, Lyft would be the better service to drive for because the fares are about 15% higher. In only 7 cities are Uber fares higher than Lyft. There are many cities that has Lyft fares over 30% higher, some over 40% more (Los Angeles, Spokane, and Lincoln). My reasoning is that I rather drive less for more money, but note that I do not guarantee that I will be making more money with this tactic. I would be increasing my profitability, which I can summarize as fare dollars per mile driven. However, earnings per hour may drop if you switch to Lyft, but with rates much higher on Lyft, it’s hard to believe that you would be making less than on Uber.

However, this doesn’t take into account trips per hour and the difference in trip distance and time between the two services in any given market. I have seen some differences in my own data between trip length and time on Uber and Lyft. It also doesn’t account for amount of Surge on Uber or PT on Lyft.

Below is the full comparison of fares. I have UberX fares listed next to Lyft, along with cancellations, minimum fares, and safety fee all in a handy chart as an image. 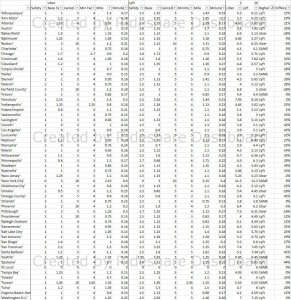 Below is the comparison of an “average” fare for both Uber and Lyft in many of the same cities both operate in. Negative percentages mean Uber was more expensive.